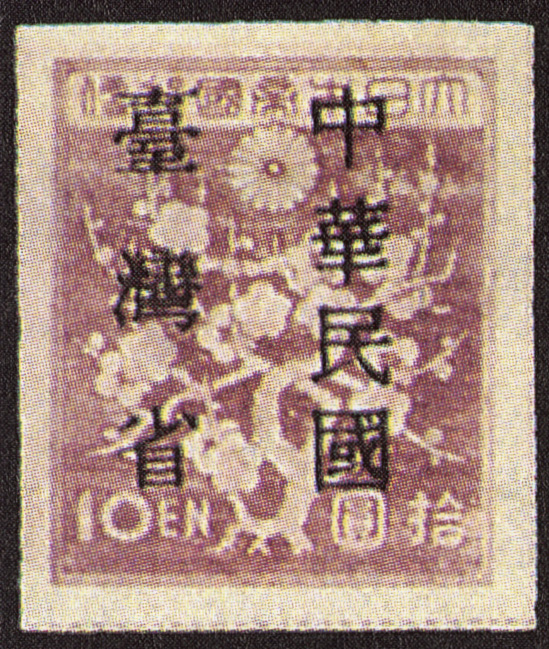 At October 25, 1945 (Republic 34th Year), Taiwan was returned to China. At November 1 of the same year, the Transportation Department of the Taiwan Administration Office organized the Post and Telegraph Management Committee responsible to take over from the previous Japanese Postal and Telegraph Administration in Taiwan. In order to stabilize the people’s livelihood, the Taiwanese currency system still uses the Old Taiwan Dollar that was in circulation during the Japanese occupation. As Chinese postage stamps (in Mainland) had not arrived in Taiwan yet, Japanese postage stamps were surcharged with Sung Type No. 5 Chinese texts reading “Taiwan Province of the Republic of China” which were overprinted locally in two vertical lines. The whole set consists of nine denominations. The stamps valued from 3-Sens to 1-Yen were in Arabic Figures design, those valued 5-Yens in Kamatari Fujiwara’s portrait design and those valued 10-Yens in the plum blossom design. These stamps, after overprinted, were sold at their original value and continued to be used even after the establishment of the Taiwan Post and Telegraph Head Office at May 5, 1946 (Republic 35th Year). However, the sale was suspended in October 1946, as soon as surcharged stamps for use in Taiwan arrived from the mainland.